Today’s review Module is a Moodle 1.9 Module. Although I have mainly reviewed modules for Moodle 2 there have been quite a few interesting modules released recently for Moodle 1.9 so this is the first of those reviews.

Todays module for review is the 360 Degree Feedback and Training Diary for Moodle 1.9. This module provides a mechanism to have a 360 review of a course participant from those not necessarily in Moodle already and linked to this, a Diary mechanism for tracking purposes.

This module for Moodle 1.9 was developed for the Homes and Communities Agency (HCA) and is currently maintained by Jonathan Newman from Kineo.

In short, this enables a teacher on a course to set up an activity which facilitates 360 reviews. Before we go further, I guess many may not have come across this term before, so what exactly is a 360 review?

Wikipedia defines a 360 review (or feedback) as feedback that comes from all around an employee. So what does this mean ? Well, as part of an employee appraisal feedback is sought from subordinates, peers, and supervisors and often clients and suppliers and often includes self-assessment as well. This is different to where a manager may be the only one providing feedback.

One thing that links most of these users is that they probably all don’t have an account in your training Moodle site, nor do you want them to. This module specifically helps address the 360 nature of feedback and the requirement of not having an account in Moodle.

The module source is managed on github, so like other modules you can browse the source or choose to download a zipfile of the plugin. However, like most other github managed modules this does not download as a pretty (instantly usable) zip file name or folder name. However as this is basically 2 mods in one download it does not matter as much.

Of course if you are using GIT to manage the code base of your local install (which if you are doing a lot of changes with ad-dons/themes it is advisable) then you will just pull from his GIT repository, for more information on that  check out the Moodle Docs page for GIT for Administrators and specifically the part on Installing a contributed extension from its Git repository

When installing the plug-in, it caused no errors but there was two global settings for “Self profile types” and “Respondent types”.  I left this as defaults as I usually do and it finished installing.

Some but not a lot. As people may know from reading the reviews here, the 1 point for documentation comes from a combination of providing information and documentation in a number of areas namely:

This module has reasonable in module help which helped me get as far as I did, and the Readme file has the 3 steps to install the modules, however there is  no  forum discussion, no Moodle Docs, and the plugin page lists features rather than any information about usage or installing. So once I ran into problems I was alone.

The lack of documentation makes testing this module a bit more difficult.  There is a lack of a clear workflow of what should be done in what order, which would certainly help.

So I added some users to the course and I added the 360 activity. I set up some competencies in the 360 Degree Diagnostics Tools. The first time it asks about how many skills will carry over and how many respondents are needed for the review. I set both to 1, to keep it all simple.

After the reviews take place, you get to see a nice report like below for each user, however after this I wasnt really sure what to do next. 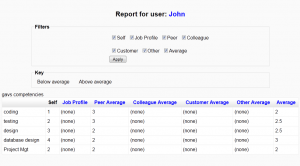 I added the diary then, which links itself to the first 360-tool on the course. However apart from giving it a name and some field names, I couldn’t figure out how to use it, I tried copying field names from competencies in the 360 tool, and skills, but nothing worked. When I next edited it, it had lost the connection to the 360 tool, so perhaps something was up with my installation “Parent 360 Module could not be determined”.

As a student/participant you need to first complete the self assessment. However that is just the first step.

Then you invite people to provide feedback to you. You just provide the email address and they get sent an email like this one below.:

This was fun as the invite bypasses Moodle authentication using a code for identification.  Once the review is done, I can get the report myself too like the admin/teacher can above.

However, as I couldn’t get the diary part to fully work I am not sure how it behaves. The error that I was getting  was “No carried competencies. Your tutor must mark competencies in 360 diagnostics activity before you can use this module” but I just couldn’t figure that bit out.

This looks like it has potential. The 360 review tool seems to work well for the review process. I like what I was able to figure out and it certainly is something I will keep an eye on to see if some documentation is released – although it did have some issues and the link between it and the diary didn’t seem to hold, but that could have been how I was setting it up, I don’t know.

I will check out the block again in a few weeks to see if the issues mentioned are addressed.

This entry was posted in Moodle and tagged 1.9, module, Moodle, Plugin, review. Bookmark the permalink.