With most the Moodle 2.2 QA testing in full swing, I thought I should do a quick post on what we can expect in Moodle 2.2, and highlight what I am most looking forward to in the release. But first a quick word on the roadmap and QA testing.

The roadmap for Moodle is always available on the Moodle docs – http://docs.moodle.org/dev/Roadmap and gives a good indicator of any major features which should appear in the coming release. One thing to remember is that with the new release cycle being a release every 6 months, it means that should a feature not be ready for release it will slip till the next release date so a solid version is released.

This release combines a range minor tweaks improvements, bug fixes, and some significant improvements specifically in some of the underlying system.  The current draft release notes for Moodle 2.2 can be found here – http://docs.moodle.org/dev/Moodle_2.2_release_notes.

Most of the first run through the tests is now complete, with the any of issues found being worked on in tracker items. This was the first release where I helped with doing some of the QA tests and it has given me a greater appreciation for the process and for the amount of work that they put into the test cycle. If you are interesting in taking part in QA testing for Moodle, you should check out the following page http://docs.moodle.org/dev/QA_testing.

As mentioned in another post, User Cohorts have got a major boost through the admin being able to use the existing Upload User feature to load users into a cohort (by specifying the CohortID).

Uploading users with a cohort ID

This is a great change, and will make it much easier for managing collections of users where people do not have existing integration with their MIS or Student management system.

For the full post on cohorts check out – http://www.somerandomthoughts.com/blog/2011/11/22/using-cohorts-with-moodle-2-2/

The new advanced grading plugin option is a huge step forward and will enable developers to build really fancy grading methods for assignments. As with all activities in Moodle, the grade is calculated in the activity, so an important thing to note is that the grading concept and rules are detailed within the plugin itself, opening up many options.  Although only the assignment currently has the new grading options, potentially any of the modules could be enabled this way with some development.

Rubrics is the first of these plugins to be developed. For those unfamiliar with the term, a rubric is basically a set of criteria which the activity is rated against.

So for example, the list of 5 criteria I use in my public Moodle 2 module reviews could be used in a Rubric. They are marked 0-1 with one decimal place and the total rounded to a number of stars.

When adding this into Moodle, it could like the following form (but for ease I have just added 3 levels  0,.5 and 1): 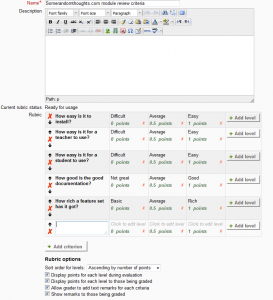 And when using it to grade, it looks like the following image: 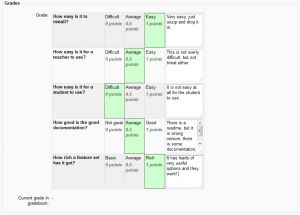 Grading with a Rubric

All the teacher does is click on the correct grade box – selecting it and turning it green, and adds a comment if required.

So a teacher can choose to use a Rubric instead of the normal grading selector and thus provide a series of scales by which the assignment is rated and graded.  For a great video about the Rubrics you need to check out this video http://www.youtube.com/watch?v=KXavtUhDINA from @moodlefairy.

The reports are now handled as a type of plugin. The new system provides a much more manageable and extensible system for the control of reports. Where before reports could only be course or site level, they now can be contextual and even with the user context. We will see the benefits of this move over time as more reports get added and it becomes easier to write reports within this framework.

I just finished a blog post on IMS LTI which will go live tomorrow, so I will include a quote here:

“For those who donâ€™t know IMS LTI is a standard for Learning Tool Interoperability. This means that learning tools now have a set way in which they can seamlessly connect to each other. This means, that while a user is logged into one tool (Moodle for example) they can then connect over to the other tool (a wiki or blog) and be automatically authenticated providing a seamless experience.”

The below image shows homework exercise on Atoms and Elements embedded into the Moodle webpage. Although the exercise is hosted on ChemVantage.org the LTI enables the teacher to use it in Moodle without having students log in again. 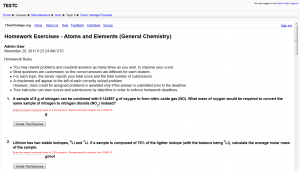 The new activity will be one that is heavily used in coming years.

Check out the blog tomorrow for more details.

This is one area which certainly gets a lot of interest. The review I did of the official Moodle iOS app is one of the most viewed pages on the blog. With Moodle 2.2 we see two sets of improvements;

(On a side note, it was announced at the Moodle Developers meeting this week that HQ had engaged an Android developer to build the GPL version of the Official App. This will be available on GitHub and is expected at or soon after Christmas.)

As @moodlefairy pointed out on her blog, http://www.moodleblog.net/?p=690 – you can now use a Gravatar in Moodle as your picture. Your Gravatar is an image that your upload to their site which then “follows you around from site to site appearing beside your name when you do things like comment or post on a blog and thus help identify your posts” .

There is a list of other fixes but some of them that I am very happy about are:

Mark Aberdour provides a good preview Moodle 2.2 features as well, on his Open Thoughts blog. He covers a range of topics including some which I haven’t included. His topics are:

This entry was posted in Moodle and tagged Features, Moodle, Moodle 2, preview. Bookmark the permalink.