A Moodle 2 version of the Moodle Tool Guide 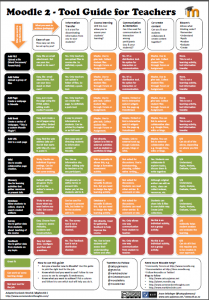 Many of you will have used and maybe still use Joyce Seitzinger’s Moodle Tool Guide (@catspyjamasnz)  which she released nearly two years ago. As her blog mentions since then people have released twelve translations of the guide into Basque, Brazilian Portuguese, Catalan, Croatian, Dutch, French, German, Hebrew, Norwegian, Portuguese, Slovene and Spanish. There has also been some adaptations for specific institutions and also for colour blind users and other LMS like blackboard and Dokoes.  * All of these variations are linked from her blog.

So last year I had put together a Moodle 2 version which included the tools as they were now in Moodle 2. I had not released it, but as I have given it to some people in the meantime, I thought I better put it up so people can use it or comment on it, suggest changes and so on. Everyone will have their own take on what should be in it or not, and rightly so. This is probably just another start point for 2 – perhaps.

With so many resource types and activities in Moodle, I had put it onto two pages although am trying to work a version into one page, again this is something people will debate about!

So it is now added to SlideShare where you can download, but you can also download the PDF and the Powerpoint here

There is also now a German version and Spanish version of the Moodle 2 Tool Guide.

Just one request, if you make a translated version, or a localised version, could you send a copy of the changed one to me for an archive. That would be great!

For all details on the original version created by Joyce Seitzinger for Moodle 1.9 check out her website -> Moodle Tool Guide