I accidentally published a draft mis-edited version of this before it was done, so sorry for that!

When last week (Friday 29th June) I saw that there was a Skydrive repository plugin released for Moodle 2.3, I just had to have a look.

Dan Poltawski (who used to work at LUNS but now works at Moodle HQ) posted that he released the repository plugin. The plugin had been created initially by LUNS for a client Universidad Teconológica de Chile (INACAP) and they released it open source. So now Dan has continued the work and has released it for Moodle 2.3.

For those who prefer to use the Microsoft tools like Skydrive instead of the Google option of Google Docs(or Drive) this will be a very welcome release.

For those who don’t know what Skydrive is, Skydrive is a cloud file storage from Microsoft. When you register you can get 7 GB free, and then you can buy more should you need it. You can either upload files to it through the browser or synchronise files with it using the Skydrive desktop app. You can also author files in Skydrive using the Microsoft Web Apps. I have not used them that much but seemed to be fine when I did.

So back the plugin. This is a repository plugin. With Moodle 2 you were able to connect to file repositories (such as Dropbox, Box.net, Google Docs and so on) but there were only so many which were already built-in. So this plugin enables you to also connect and retrieve files from your own Microsoft Skydrive account.

So to use it, you need to either have an account with the Microsoft LIVE already, or you can create one. Creating one is quite quick:

You will also need to configure the Moodle site as an API, but more on that in a bit.

To download the plugin, you can either download from the plugin directory entry, or you can retrieve it from Dans GITHUB account. Once I had downloaded the zip, I unzipped it and it created the skydrive folder. I uploaded this folder to my Moodle site into moodle/repository/ folder. Just as blocks go into /blocks and themes go into /theme a repository plugin gets put into the Moodle/repository folder.

I logged into my test site and installed it without any issues. There was no global settings prompted for so that was that.

Then I went into the Administration tree, into plugins, repositories and chose Manage repositories. This is because although it is installed it needed to be enabled.

On the settings page to configure the Microsoft Skydrive in Moodle, it provided the basic guidance of what you needed to do which is:

Create an APP with Microsoft (as below images show) 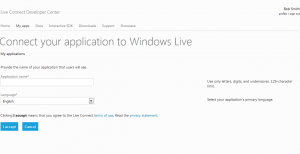 Step one for creating the Application on Windows Live 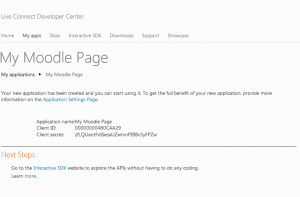 Step 2 for creating the Application on Windows Live

Once created you then need to take note of the Client ID and Client Secret for use in Moodle. But you must also go into the settings to provide the callback URL to Moodle. 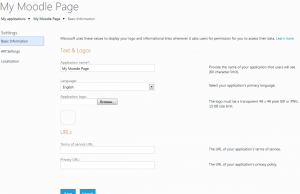 Step 3 for creating the Application on Windows Live

Provide it the redirect url to the Moodle site as specified in the configure page. 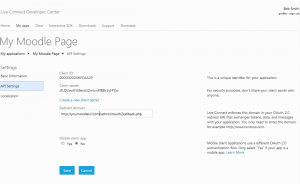 Step 4 for creating the Application on Windows Live

You can ignore the localisation options, and that’s the Microsoft Windows live side complete. Now back to Moodle.

With the two settings from the Windows LIVE application page – Client ID and Secret and put them into the Configure Microsoft Skydrive page in Moodle as below.

(Please note the example codes in the images are already disabled so don’t bother trying them).

Once this was saved, it was all ready for usage. *whew*

Some. This is a very new plugin so hard to expect much yet! The instructions for the requirement for the Microsoft Live application setup are quite clear, and the Default installation instructions for plugins in the category repositories work as is, which is great but it may be good to have them on the Moodle Docs page too.

A large part of this plugin usage is based on people knowing the file picker for usage, so there is no documentation for that.

There is no README.txt however, and hopefully there will be some user guidance beyond installation eventually, but

The usage once set up is very simple really. Once you have added files to your Skydrive Documents folder (as below) you will then be able to access them from Moodle. 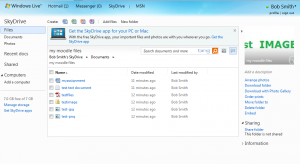 So when you go to add a file into the Moodle course using the file picker, now the Microsoft Skydrive option appeared on the left and when I clicked on it I was prompted to log in and authorise the Moodle site to access the Skydrive. Once done, it was magic. 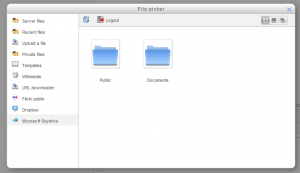 You can see the various folders and trees using the File picker options: 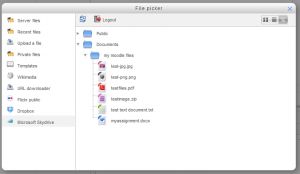 And you can then click on a file, and then if it is the correct one you can select it. 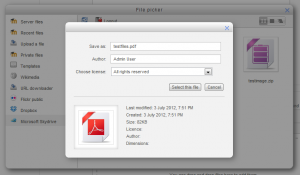 Once you select it, it then is copied over into Moodle and appears in the File Manager part of the Add resource page as below:

So yes, it is just that easy.

However, there is more – which is very cool 🙂

If you install the Skydrive App on your desktop, the files in the specified folder will then synch up into the cloud, and then be available from Moodle.

So this means you can work away on a file on your machine, have it auto-copied into Skydrive and then add it to Moodle as shown above.  Quite cool really, and this works on Windows, Mac, Ipad and Windows phone.

Yes. Once installed and configured this does exactly as expected providing a solid integration between the Microsoft Skydrive cloud and Moodle.I like it a lot, and especially when combined with the local synching. Nice work there Dan.

There is also a tracker item to vote to get this included into core – which I recommend that you vote for – http://tracker.moodle.org/browse/MDL-30740 (you need an account registered to vote).

So it really comes down to which solution do you want to use, Google, Skydrive, or Dropbox etc. – which is the point I guess. You can choose what you prefer / have available and this plugin just gave you another choice.!

Stars: 4 out of 5 stars for this plugin

This entry was posted in Moodle and tagged microsoft, Moodle, Plugin, repository, review. Bookmark the permalink.