We ran a small competition for the last few weeks where people could enter a draw for the Moodle Gradebook book by Rebecca Barrington, published by Packt Publishing  by just filling in a small form detailing their top plugins. The winner has been notified by email.

We have quite a few entries, which gave some nice information on plugin usage too.

So taking the recent Olympics fever, let’s have a quick medal ceremony!

In first place the most popular Plugin from submissions was ….. Certificate Module

A popular module for Moodle 1.9 or Moodle 2, this topped the poll ahead of some other great plugins.

In second place, the old favourite Book Module came in!

Even though this is now in core in Moodle 2.3, more than half of those who submitted were using Moodle 2.2 or and older version.

In my experience, these modules are heavily used so this was no surprise.

A very close runner was Checklist which just lost out on a joint third by one vote.

Although there are many great modules, this was just from people’s submissions for the Book giveaway.

Another interesting stat from the submissions is the Moodle versions that people said they were using: 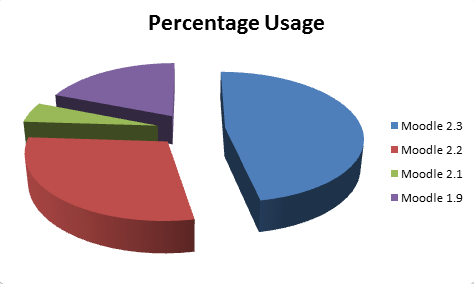 Certainly nice to see Moodle 2.3 way up there! But perhaps that is more of an indicator of the readers of this blog, who knows!

This entry was posted in Moodle and tagged book, Giveaway, Moodle, plugins. Bookmark the permalink.