A look at the Moodle theme – Essential 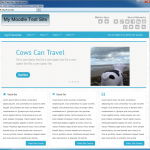 Sometimes a new theme or plugin can take a while before people know about it and start using it, but this was not really the case for the new theme by Julian Ridden (from Pukunui Moodle Partner) called “Essential” which within the first 2 months is the most downloaded theme over that period.

Not every theme will suit all organisations design decisions. As I mentioned in my theme whitepaper, each theme comes with a set of features and pre-existing layout choices which gives the theme developer a menu to start from when building a new theme. So if you have a specific concept in mind you look for a theme which meets those needs or has those features already so you have a base to work from.

Julian takes this point and runs with it – making his themes feature rich and highly configurable to tackle a lot of the potential requirements.

So what is Essential?

As Julian puts it Essential is a theme “made to have the site look as little like Moodle as possible” which can be used where “Moodle would potentially serve as a company homepage rather than just a course list”. It has a lot of setting options  covering

The theme is Responsive so that it can intelligently and dynamically reposition the content on the page as the size of the browser window changes which is especially useful for use on Mobile or tablet devices. Consider the examples below: The first image is a standard browser size and the second is from the 768 width which could be a tablet. 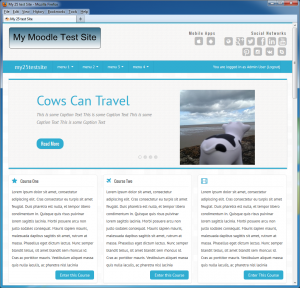 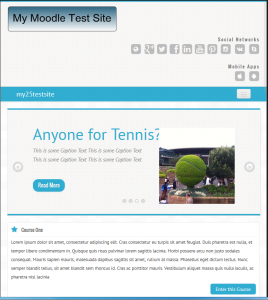 The bottom blocks have repositioned under the first one so that they look best on the page rather than too squeezed. With responsive design however as you can see in the second one you do need to consider the header and how much you want to have in it.

The front page reminds me more of a company website (as is the intention) than a Learning Management System. The inclusion of the slide show and the three marketing blocks provide a great tool for those wanting to promote certain aspects of their site. These blocks could be promoting courses or the Student Help / Library and Support areas in an academic context.

An example of one of the settings pages is the one page which powers the excellent slide show on the front page. The slide show rotates through up to four slides which are configurable with the name, image, text and link that they each use.

Firstly you can select whether you want it to display on mobiles or not which is handle as it may take up a lot of space before the other content.

Then you can configure each slide as shown in the image below: 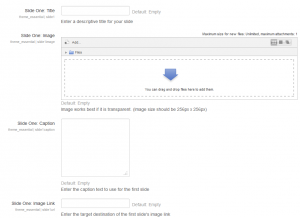 Configuring a Slide from the Slide Show

This is a very cool feature and nicely implemented making this a simple task for the admin!

The inclusion of 3 blocks on the front page which are totally configurable through the UI is a neat feature. You can turn on/off this feature of the theme if you want to. When configuring each of the blocks like the slide show it is very easy to do: 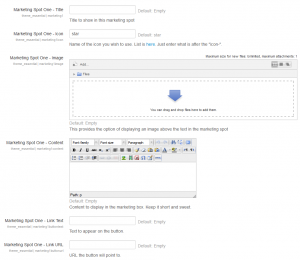 This is really useful and I see it being used by most who try out the theme!

I must admit that in fixed width designs I think that two columns of Blocks really squeezes the course content area so if I was basing a design on this theme I would have only one column. The Essential theme moves by default the two columns to the right rather than one on either side of the “middle” content area. Having both options available for people to choose is a good thing, as some will like the standard way and some will like the new alternative. 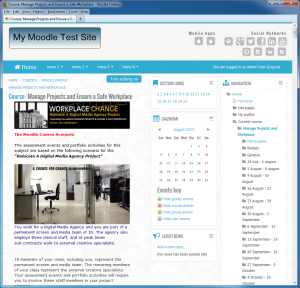 There does seem to be a few minor issues with styling of form fields which shows up in the Gradebook with fields being longer than normal which makes it too wide. This is also an issue in the core Clean theme but I imagine minor layout issues like these will be tackled soon enough.

This is only available for the latest Moodle due to various improvements that were added – including the Bootstrap based theme. I hit a bug trying this on Moodle 2.5 but it worked fine on Moodle 2.5.1 so be sure you are on the latest version of Moodle if you are going to try it out.

The Moodle plugin directory page for the theme is: https://moodle.org/plugins/view.php?plugin=theme_essential

The theme is also available from GitHub here: https://github.com/moodleman/moodle-theme_essential

I am sure that this theme will continue to be rolled out by many organisations as the base for their Moodle site theme. The wide range of settings and responsive nature of the theme certainly will make it “essential” for many Moodlers. I know of a few who will be wanting to upgrade to 2.5.1 just to use this theme which in itself is a good thing too!

Oh and Julian with so many features it would be great to have a google analytics setting in a later version so that users could implement either the standard Google Analytics tracking or the more advanced Google Analytics Tracking. This would really help companies who need to provide higher level of statistics reporting. Next version maybe Julian? 😉

This entry was posted in Moodle and tagged 2.5, Add-on, Moodle, Plugin, theme. Bookmark the permalink.

2 Responses to A look at the Moodle theme – Essential