Thoughts from the road – Barcelona Moodlemoot

Today the Moodlemoot Spain 2013 kicked off in Barcelona at the Universitat Pumpeu Fabra, Barcelona.  One of the first speakers was Martin Dougiamas speaking about teaching and learning.

Martin started off with a retrospective on various solutions over the last 100 years which have claimed that  they will replace teachers and as of yet have not. It is an interesting thought to contemplate as to what the role of a teacher was, is and will be as technology and society changes. There is so much content available, networks for discussions and sharing and tools that can be used to assess – maybe technology is making more of us teachers and not less.

One of the other points Martin talked about was where the focus was with Moodle development. I was most interested in the improvements in the forum which he discussed including Discussion Thread subscription, in-line replies and posting stats.

With the Moodle Research Conference taking place next week in Tunisia, it was great that Martin also shared some of the research questions that he would like to see answered: 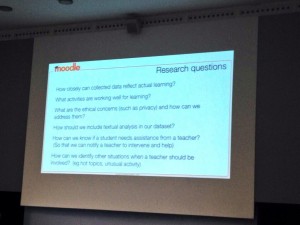 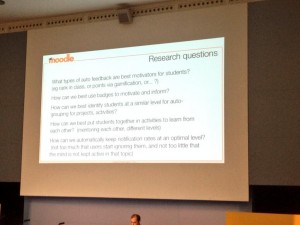 There is a lot of points there which can be looked into.

Thats all for now, more over the coming week while I attend two Moodlemoots and the Moodle Research Conference.

This entry was posted in Odd Bits and tagged 2013, Barcelona, Moodle, Moot, Spain. Bookmark the permalink.